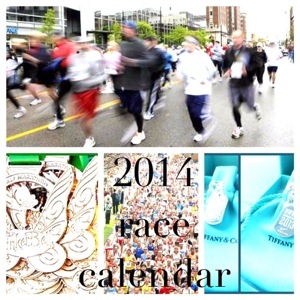 I have been getting very amped up about next year’s race schedule, even though I feel like I can’t really plan for it yet. Since I’m still hoping to be relocated not too long into the new year, and because I want to focus most of my money toward debt repayment and savings instead of racecations, I plan to run mostly local races. I definitely want to run 14 races (probably not 14 half-marathons because $$$), but right now it’s hard to plot out what/where those are going to be. Here is my current 2014 race calendar:

Some pretty big aspirations already. Two halfs in one weekend, and the Riverbank Run. I have secretly wanted to do that race for years, even when I was saying how badly I hated running and how that couldn’t be fun and oh my gosh what is wrong with those people. So I think this will be the year. I’ll have to fly home, but at least I’ll be in Michigan. I’m trying to recruit friends and family to do it with me.

I plan to do Wine & Dine with NP to get my Coast to Coast medal, so I hope I end up liking runDisney and that I still like running by November. 🙂 I would like to do an Atlanta race to visit my BFF, and potentially the Detroit Women’s Half or Detroit Half.

I want to add some Rock ‘n Roll races to my list – I badly wanted to do the DC half, but registration is $130! That is crazy. I will probably do Cleveland again, and Vegas is on the bucket list, but November is so far away. I hate being in this weird state of flux where I’m not sure I’m going to stick in one place for very long. As a result, next year might not be The Year of the Marathon either… we’ll see where I end up.

Are there any must-do races in the Virginia/DC area in the beginning of the year? Are you going for 14 in 14?

This site uses Akismet to reduce spam. Learn how your comment data is processed.

I’m a northern girl born in Michigan and living in Chicago. I love music, travel, fitness, pizza, and beer. I really like to laugh and listen to The Hold Steady. Read more or follow me on social media.

If you’re new here, be sure to check out some of the most popular posts!

Detour: My Bipolar Road Trip in 4-D
by Lizzie Simon

I Am Here Now: Field Notes for a Curious and Creative Mind
by The Mindfulness Project

Holding Up the Universe
by Jennifer Niven

The Seven Husbands of Evelyn Hugo
by Taylor Jenkins Reid